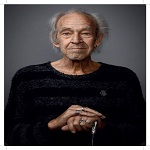 Joop Valstar, EABP Honorary member and past President, died very early Wednesday morning, 2nd May, in his home in Amsterdam.

In a world which is increasingly superficial and directed to appearances and the outside world Joop was a man of character and depth.
Not to say that he didn’t care for his personal appearance – on the contrary, he did. He dressed with flair. Perhaps the first thing you noticed about him was his beautiful coat or hand-crafted shoes; then his tall stature, greying hair and marked face, which could crease with a grin and warmth, or with great seriousness.

Joop listened. He chewed over what you said – perhaps for some minutes, some hours or sometimes days. Then would come a comment or an answer to a question or a problem, which he had considered from many different angles. He was never satisfied with a simple answer – his solutions were rounded, thought out, compassionate, surprising, meaningful.

I personally met Joop in 1999 when he came to the training I was following to talk about EABP. I felt drawn in, attracted by how he talked about his work and the Association and what it could offer us as newly trained psychotherapists. It wasn’t a sales-pitch – what he said made sense, was intelligent, had passion.

Then I attended the congress in Travemünde and his workshop on outfit (“Second Skin”) and personality. It was at this congress that he offered the NVLP as organiser for the next EABP congress in Egmond aan Zee in the Netherlands in 2001 and he asked me to organise.

Joop had established the NVLP – the Dutch National Association – in 1999 ¬– and with a small group of dedicated people around him, built it up by inviting in the BP modalities in the Netherlands and organising together the biannual symposia with excellent guests and workshops by the modalities’ members. He was also in the first board of the NAP (the Dutch EAP) and stimulated the BP modalities to join this organisation.
We both remember our first organisational meeting in my office when we got into an argument about an English word. Joop was particular about translation – and I had taught English and was a native speaker. I stood my ground and this time I managed to prove – eventually – that I was correct. But there began years of being corrected on language, punctuation, layout, where my ego took a dent, but where I began to appreciate his perfectionistic eye for detail. The results were always worth it. Everything that Joop did fitted.

Joop had been with the EABP from the beginning. He was a psychologist and trained in Unitive Body Psychotherapy with Jay Stattman. He had attended all the congresses and worked on several committees including the Training Standards Committee. Joop was present at the formation of the FORUM and the COUNCIL of National Associations.

Joop’s practice on the Oudezijds Voorburgwal in Amsterdam became a home to many. Several local and international Training Institutes used the upstairs room for training and others met downstairs. Later the Board and the Science & Research Committee made a home for their meetings. It was not just a space – it was warm, light, comfortable and the center-piece was always a huge vase of flowers. Lunch and morning and afternoon teas were feasts with plenty of coffee, tea, beer, wine and Dutch cookies. Visitors from outside Amsterdam could also stay the night. In the days that EABP barely covered the costs and struggled to survive financially this was a tremendous gift to the Association.

The congress at Egmond aan Zee started on 13th September 2001. Tuesday before was 9/11 and suddenly it seemed as if all our planning and organisation would be for nothing – people would not want to attend or would not be able to travel. We expected two Keynote speakers from the USA. Luckily one turned out to be already in Europe. We only missed Mark Ludwig. Joop lead the reorganisation of the programme and the congress went on. He gave a wonderful thoughtful opening speech, which brought us all together. And the first session was a meditation, which settled us all into what became a wonderful and very successful congress where the 9/11 shock was integrated in most parts of the programme.

Joop became a member of the EABP Board in 2002, so supervised my activities when I took up the role of EABP Secretariat. We worked closely together, meeting once a week on Fridays to work on whatever was next. He worked very closely with a graphic designer and friend, Chiel Veffer, on redesigning the EABP logo and creating a House style which was used throughout the Association up until today. Together we updated the website and redid the Membership and FORUM handbooks. Under Joop’s direction the paper Newsletter became a work of art and the Congress Grey Books too. We formed a wonderful collaboration.

In 2006 Joop became EABP President. He was particularly happy that his becoming ‘the first gay President’ did not bring up discriminative – negative or positive – issues in any way. Once again he hosted the Board meetings in Amsterdam. It was not an easy Presidency – Joop missed experience and affinity to deal with several strong characters on the Board and decided after two years to step down.
When he left the Board in 2008 he continued to work on the Science & Research Committee and on the symposia held during the congresses. His presentation at the very first Science symposium was a statement of where EABP is and what the Association needs to work on. Little has changed. ‘What am I doing anyway?’ From a body psychotherapist’s perspective he gave a brief historical framework in which to place his statement: “The main issue is the development of basic theory and research on a level that goes beyond beliefs and wishful thinking.”

Joop developed the Wilhelm Reich Foundation, initially in The Netherlands, since 2014 on the European level – a foundation gathering funds for research and other developmental and promotional activities.

Joop made an enormous contribution to EABP from its beginnings in 1989 up until today. As few others, he participated in the COUNCIL, the FORUM, many committees, on the Board and indeed as President. He was prominent in forming the thinking about body psychotherapy and the EABP and in all the work he did gave it a face and a body.

In 2012 (Congress Vienna) Joop was given EABP Honorary Membership.

|  news  | next: USABP – Call For Proposals to Present